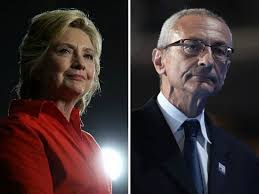 "There needs to be a Catholic Spring, in which Catholics themselves demand the end of a Middle-Ages dictatorship and the beginning of a little democracy and respect for gender equality in the Catholic Church," Sandy Newman, president and founder of Voices for Progress, writes to Podesta in an email titled "Opening for a Catholic Spring?"

In response, Podesta assured Newman that he and his progressive cronies have already created organizations explicitly designed to infiltrate the Catholic Church with progressivist ideology. "We created Catholics in Alliance for the Common Good to organize for a moment like this," he said. Note that Catholics in Alliance for the Common Good is funded by left-wing socialist George Soros who is known for funding civil violence aimed at bringing down America.

This report about Hillary's campaign plans to incite revolution among Catholics reveals all the more the contempt that globalists have for the Catholic Church. It is a centuries-old battle between Lucifer and God which is coming to a head, and providence has it that America is to be the stage-set for the final dramatic act. It is hoped that the Church in America can rise up at this time to assist its prospective leader in making America great again.

The powers that be that are warring against Trump and America are the members of the Illuminati, a satanic secret society founded by Talmudists Adam Weishaupt and Mayer Rothschild in 1776. Unbeknownst to the general public, the members of this cabal labor secretly for Lucifer under the pain of death, and as such, are known among themselves as Luciferians. Their objective from the beginning is to abolish Christianity and to enslave man under the tyranny of a communistic one-world government run by a small financial elite.

Hillary, Obama, and Soros are pawns of this cult. It is no secret that Hillary from her early years was enamored with the late Saul Alinsky, whose famous book Rules for Radicals—a favorite of Hillary's—was dedicated to the devil.

Hillary is also a member of the inner sanctum of the infamous Rothschild cabal wherein she and Lynn Forester de Rothschild have a long history of "adoring" Satan together. Wikileaks Reveal Clinton Ties To Rothschilds And Occult Cabal

Their assignment for the elite masters is to crumble America through moral and economic collapse, since they know the U.S. is the only nation left on earth that can act as a mighty dam to hold back the rising tide of globalism. They know that when America the Beautiful finally caves in with moral decay—most especially through the rampant abortions and LGBT agenda that Hillary is pushing—America the Beautiful will fall. The plan is to ignite the fuse of revolution and bring about a state of emergency that will provide U.N. "Peace Keeping Forces" with an excuse to step in with martial law—a plan that Putin has been watching closely.

Already news has leaked that the Kremlin has issued an order requiring all Russian students studying abroad to return to Russia immediately, even if it means cutting their education short. http://www.zerohedge.com/news/2016-10-11/russian-government-officials-told-immediately-bring-back-children-studying-abroad  Commentators have questioned what this could mean, but when we consider Hillary's long-time alliance with Putin and how she and President Clinton used their positions to supply Russia with $billions and top secret military information, the picture begins to clear up. Russia may want to spare their young-blood from what is about to break out in the west.

It is no secret that Hillary is a Putin lackey who has been executing his design to bring revolution to America. If Putin plays the "Christian" and publicly "laments" America's fall to corruption and revolutionary attitudes, it's because he is concealing his own fingerprints.

Needless to say, America is about to enter upon a pivotal moment of its history when religious leaders need to act decisively to get the right man into office. Guiding America onto a better path is not a political issue, but a moral one. If the bishops of America are not bold enough to admonish Catholics to vote for Donald Trump, they can at least sound the horn about Hillary's pro-death agenda and her work to corrupt Catholic teaching and morals.

If Pius XII ordered German Catholics not to vote for Nazi officials, why can't Francis and his bishops order Americans not to vote for the Feminazi among us? If the American bishops are against Hillary and the American Holocaust she advocates, let them prove it. We have an outstanding pro-life candidate who is ready to go to bat for America, so let the Church in America endorse him, lest his enemy take office and put the Church and the people in chains.