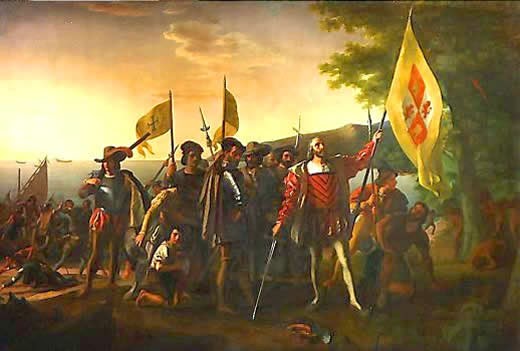 Christopher Columbus, the great Catholic explorer, has been unjustly marred by historians and liberals. The true Christopher Columbus was a saintly man who sought to serve the Holy Catholic Faith and His Sovereign King.  Despite unprecedented challenges, Columbus ultimately ushered in the colonization and Christianization of the Western Hemisphere.  As a deeply religious man, we can learn from his Faith and devotion.  Join me in crying out: Sancto Subito! (May he be declared a saint soon!)

The following is excerpted from an excellent article on Nobility.org. Please read the whole article in honor of Columbus Day.


Before leaving [on his legendary voyage], Columbus received the Sacraments of Penance and Holy Eucharist, at the hands (it is stated) of Father Juan Perez, the officers and crews of the little squadron following his example. On 3 August, 1492, the people of Palos with heavy hearts saw them depart on an expedition regarded by many as foolhardy.

Columbus was unquestionably a man of genius. He was a bold, skilful navigator, better acquainted with the principles of cosmography and astronomy than the average skipper of his time, a man of original ideas, fertile in his plans, and persistent in carrying them into execution. The impression he made on those with whom he came in contact even in the days of his poverty, such as Fray Juan Perez, the treasurer Luis de Santangel, the Duke of Medina Sidonia, and Queen Isabella herself, shows that he had great powers of persuasion and was possessed of personal magnetism. His success in overcoming the obstacles to his expeditions and surmounting the difficulties of his voyages exhibit him as a man of unusual resources and of unflinching determination.

Columbus was also of a deeply religious nature. Whatever influence scientific theories and the ambition for fame and wealth may have had over him, in advocating his enterprise he never failed to insist on the conversion of the pagan peoples that he would discover as one of the primary objects of his undertaking. Even when clouds had settled over his career, after his return as a prisoner from the lands he had discovered, he was ready to devote all his possessions and the remaining years of his life to set sail again for the purpose of rescuing Christ’s Sepulchre from the hands of the infidel.

The following author highlights the Franciscan nature of Columbus.  Columbus was a third order Franciscan and daily prayed the Divine Office:


As early as 1493, Columbus wrote a letter to the Royal Treasurer of Spain in which he speaks of the discovery of the New World as a great victory. Yet, it was not a victory by force of arms but a victory of bringing the truth to people who were sitting in the darkness of unbelief. He wrote, "Since our Redeemer gave this victory to our most illustrious King and Queen and to their famous realms, in so great a manner, it is fitting for all Christendom to rejoice and to make celebrations and give solemn thanks to the Holy Trinity with many solemn prayers for the great exultation which it will have and the turning of so many peoples to our holy Faith."

All that we know about Columbus testifies to his having lived up to his Franciscan Rule. We know that he would wear the Franciscan habit, especially when he appeared before the Royalty or nobility. Except for the Franciscans with whom he stayed before leaving on his historic voyage, he would never had received the entree to Ferdinand and Isabella which opened the door to the New World. He went to confession to Franciscan priests. He would spend long periods of time in worshiping before the Blessed Sacrament in Franciscan chapels. When he left Palos, Spain on August 3, 1492 to cross the Atlantic, he left his son in the care of the Franciscans at their monastery. 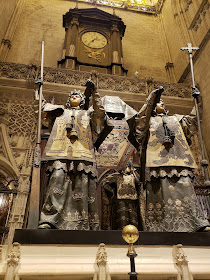